As we descend further and further into “unprecedented” territory, it’s important to note that the Arizona Department of Corrections seems to be doing the same old, predictable thing: Avoiding accountability & transparency.

While hundreds, if not thousands, of families across Arizona have begged for information regarding ADC’s plans to prevent the spread of COVID-19 inside state prisons, the department has mostly ignored them. And instead of answering direct questions from reporters, the department has stalled and evaded them while disseminating vague, ambiguous “management strategy updates” via its website, corrections.az.gov.

Just Wednesday, April 1st, the department announced via said update that it had tested 34 incarcerated people for COVID-19, with 29 negative results and another five still pending. But ADC failed to add where those tested are incarcerated, what symptoms they exhibited, and what’s being done to protect those around them.

On Monday, March 30th, the department posted another update, claiming that ADC Director David Shinn had reached an agreement with all 15 county sheriffs throughout Arizona to suspend transfers to state prisons for 21 days. It turns out, however, that the agreement does not apply to jailed persons who have been detained because of technical violations on community supervision. And, another important note: All 15 sheriffs did not, in fact, agree to Shinn’s plan. 👇

For what they’re worth, here’s a list of other “management strategy updates,” so far:

Thanks to the hard work of the Pima County Public Defender’s (PCPD) office, dozens of people stuck in pretrial detention at the Pima County Jail were recommended for release last week in order to prevent widespread infection of COVID-19.

It all started with a memo from Joel Feinman, the head of PCPD, to other county agencies — including the Pima County Attorney’s Office (PCAO) — urging the release of as many people charged with nonviolent offenses as possible.

“Given that so many [people] are charged with nonviolent drug offenses, and the overwhelming majority of them are in jail because they’re too impoverished to pay for their bail, it’s inhuman to condemn people to illness and death because they can’t afford to post $1,000 bail on a drug possession case,” Feinman told Tucson Weekly. “It’s simply inhuman.”

Pima County isn’t the only jurisdiction in Arizona releasing folks from pretrial detention. Coconino County released approximately 50 people a couple of weeks ago (and about 100 to date); Graham County Undersheriff Jeff McCormies told AFSC-AZ that his jail population had been reduced by “about 25 percent” by working with local courts; and Maricopa County has suspended its work release program, allowing an unspecified number of people to go home.

Our coalition is continuing to work toward widespread releases throughout the state to minimize infection due to “jail churn”. Follow AFSC-AZ’s social media accounts for updates.

AFSC-AZ will continue to focus on how to best help those impacted in our state prisons. We will share updates and actions as we know more. In the meantime, you can find our updated COVID-19 resource page on AFSCArizona.org.

Recently, we uploaded tips for staying connected with your incarcerated loved ones. Plus, the results from our COVID-19 survey, in which we asked all of you to share what information you need from the Department of Corrections. We’re also launching a virtual clearinghouse of organizations you can support and actions you can take to help incarcerated people across the country.

Our friends at FAMM are promoting an action to humanize people in prison who are frightened of COVID-19. All it takes is a social media account to help!

#iCARE4 [person’s name]. [Something special about this person] She/he is worried about #COVID19 in prison and especially those who are elderly.

Another social media action you can join is Puente’s #FreeThemAll Twitter storm campaign, as Puente demands that ADC and Director Shinn “release ALL individuals from ADC facilities to protect public health and safety during COVID-19”. 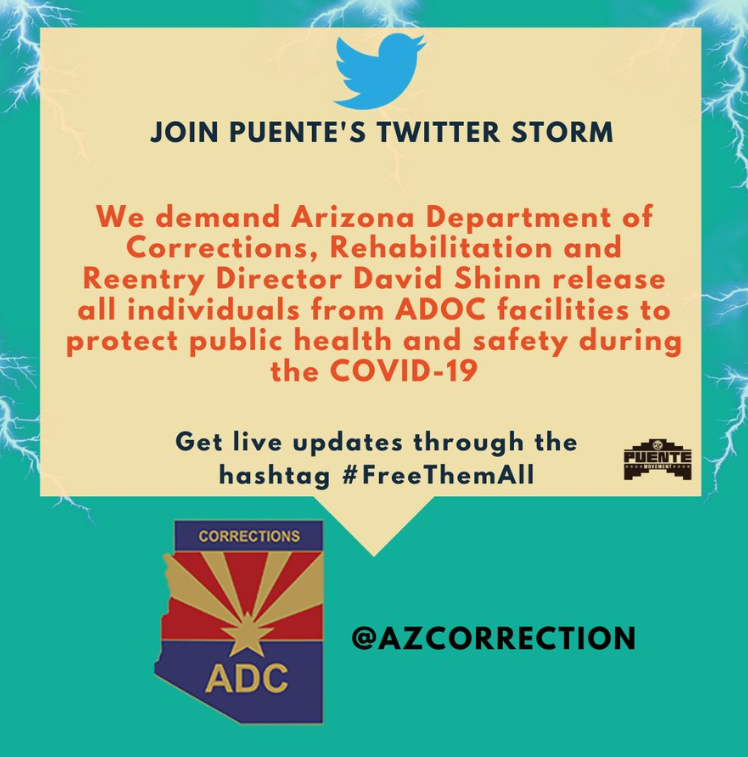 Arizona Correctional Officers Say They Are Not Allowed to Wear PPE at Work
March 31st, 2020 by Jimmy Jenkins & Steve Goldstein, via KJZZ

Let your representatives know that you support Sentencing Reform in Arizona!

In the meantime, you can start to build momentum for commonsense ERC reform by uploading AFSC-AZ’s #ERCReformAZ Facebook photo frame and telling your families, friends and followers that the 85% rule is failing our communities. Click here to upload yours now!

If your reform efforts are focused on achieving real accountability from ADC, you can upload AFSC-AZ’s #CitizensOversightAZ Facebook photo frame. Click here!

This site uses Akismet to reduce spam. Learn how your comment data is processed.