Even in these extraordinary, uncertain times, people within our movement are truly pulling together in order to achieve positive changes. Advocates from across the country and across the spectrum – activists, educators, community organizers – are working to raise issues that have always existed within the system, but are even more concerning now.

You can track what’s going on across the country to respond to the COVID-19 pandemic behind bars by following a couple of great resources from the Prison Policy Initiative and The Justice Collaborative.

Meanwhile, here in Arizona, our friends at FAMM sent a letter this week to Gov. Doug Ducey – to which AFSC-AZ and several of our coalition partners signed onto – urging him to “begin the process of targeted release of vulnerable prisoners at the earliest possible time”. We join FAMM in recommending to Gov. Ducey that he exhausts every option for allowing as many people as he possibly can to return home to their communities and their families.

Also, our partners at the ACLU of Arizona are leading efforts to reduce county jail populations across the state. This week, they wrote a letter to sheriffs — to which AFSC-AZ, again, signed onto — telling them:

“It is imperative that our sheriffs use whatever power they have to reduce jail populations during this public health emergency. State law bestows authority on sheriffs, with coordination from other system actors, to effectively handle a crisis like this one…”

We Came, We Saw, We Tweeted!

Many of the actions being taken across the country that have worked to reduce jail and prison populations since the beginning of the pandemic owe much of their success to social media efforts. Which is why AFSC-AZ asked our partners and followers on our social media platforms to join us for a Tweetstorm on Tuesday, April 7th, during Gov. Ducey’s press conference with Dr. Cara Christ, the director of Arizona’s Department of Health Services.

We had partner organizations FAMM, ACLUaz, and the S.T.A.R.T. Project join dozens of you who tweeted and retweeted messages regarding your incarcerated loved ones to the Governor and Dr. Christ during the press conference, which you can view by clicking here. You can see much of the Twitter action using the hashtags #FamiliesDeserveAnswers and #FlattenTheCurveAZ.

Save for vague answers to two questions from the indefatigable Jimmy Jenkins of Phoenix’s NPR affiliate, KJZZ, neither the Governor nor Dr. Christ laid out plans for keeping people safe inside state prisons. In fact, Gov. Ducey stated that, in order to “protect public safety,” his administration is “not going to be releasing any prisoners at this time.” (You can see this exchange beginning at 52:55 of the video linked above.)

Which is especially concerning, considering that late Tuesday night, just hours after Gov. Ducey’s press conference, the Arizona Department of Corrections released a statement confirming that two people who are incarcerated were diagnosed with COVID19, the first official cases of their kind. 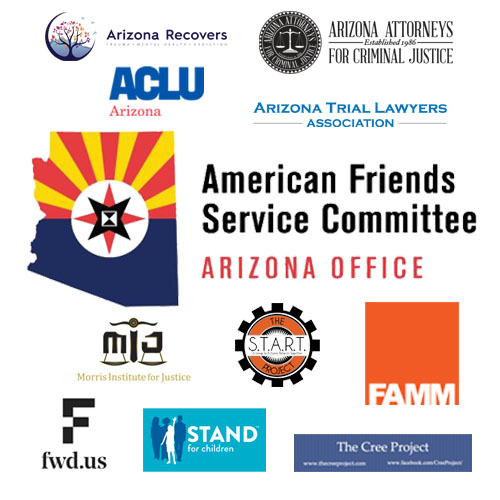 After collecting evidence for two weeks prior, thanks to the help of our ReFraming Justice Leaders, people who are incarcerated, and their families and loved ones, AFSC-AZ sent an open letter to DHS Director Dr. Christ requesting immediate inspections of all state prisons.

This action was led and coordinated by AFSC-AZ, and we are grateful to so many of our coalition partners for amplifying the call for DHS leadership. In addition to the inspections themselves, we asked that DHS:

As always, AFSC-AZ will keep you updated on further developments as they happen.

ADC finally answered the call of so many families and advocates who have been asking for a COVID-19 dashboard, similar to one started by the California Department of Corrections and Rehabilitation (CDCR) weeks ago. As of today, April 10th, there are four confirmed cases within ADC’s general population across three complexes.

Currently, the dashboard is not tracking positive cases among correctional staff. But rest assured that AFSC-AZ and our staff will ask for ADC to provide that information immediately.

AFSC-AZ will continue to focus on how to best help those impacted in our state prisons. Today, we uploaded a new guide to our COVID-19 resource page for those who want to help TAKE ACTION with organizations from here in Tucson, around the state, and across the country. We will add new actions as they are announced.

This site uses Akismet to reduce spam. Learn how your comment data is processed.